The LapuLapu giant solar artwork created by the Liter of Light in Cebu is inspiring a new generation of climate heroes from the Philippines.

Liter of Light, a Filipino-born global grassroots solar lighting movement, unveiled the large-scale tribute to Lapu Lapu, honoring his legacy and inspiring a new generation of climate heroes, on April 30, 2021.

The Lapu Lapu portrait, set up and lit at the SM Seaside Cebu, is one of two large-scale participative solar artworks that Liter of Light has featured in Cebu, where it recently kicked off the Visayas leg of its LIGHT IT FORWARD campaign. It follows the successful showcase of a largescale, solar-powered image honoring the Santo Niño de Cebu.

The Santo Niño de Cebu image premiered to the public in a virtual launch on April 26, the eve of the Quincentennial commemorations of Lapu Lapu’s Victory at Mactan. The video unveiling a tribute to the Patron Saint of Cebu has since garnered over 100,000 views. The artworks are part of a series of several artworks that Liter of Light will be building and unveiling in Cebu over the next months.

Each of the hand-built solar lights that make up the installation, which pays homage to the Visayan datu, were built by thousands of participants who signed on to Liter of Light’s “Light It Forward” Challenge. Inspired by the ALS Ice Bucket Challenge, LIGHT IT FORWARD has given Filipinos a new way to connect for good by inviting them to build solar lights for communities without electricity from the safety of their homes. Since July 2020, this pioneering and award-winning digital campaign has empowered thousands of families in energy-poor and disaster-stricken communities across the country.

“Lapu Lapu is the first documented example we have of a hero who defended our land,” says Illac Diaz, Liter of Light’s Founder and Executive Director.

“The threats to life as we know it no longer have the faces they did 500 years ago. Rising sea temperatures, more extreme weather conditions, and global health pandemics – these are the new threats that will challenge the way we live in the next 500 years. In honoring Lapu Lapu, we are calling on new climate heroes to protect our natural ecosystems, our cultural heritage, and our planet. Ours is the last generation that can take action now before it’s too late.”

“In unison with the call of Liter of Light’s Founder & Executive Director Illac Diaz for new climate change heroes to emerge, SM Seaside City Cebu is happy to support the second solar light tribute to the first Filipino hero, Lapu-Lapu. Its parent company, SM Prime has consistently been advocating projects that serve to enhance one of its major roles as an environmental steward in an effort to inspire generations of Filipinos to become modern-day heroes to protect the planet. This solar tribute of Lapu-Lapu is truly an appropriate reminder of such a mission,” says Marissa Fernan, Vice President of SM Prime Holdings, Inc. 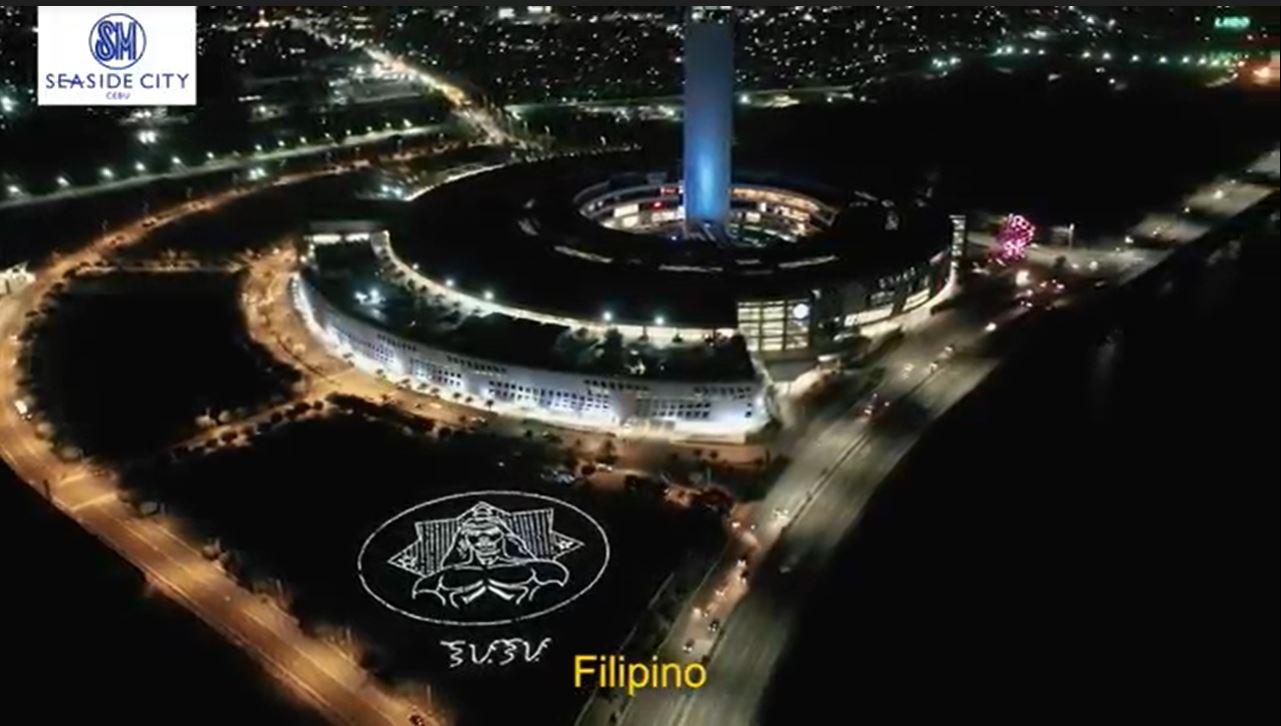 The hand-built solar lights that make up the installation were built by thousands who participated in Liter of Light’s “Light It Forward” Challenge. Conceived in 2020, this pioneering digital campaign has empowered more than 15,000 families living in energy-poor and disaster-stricken communities across the country.

The lights used to configure the installation will be distributed to beneficiary communities across the Visayas region, including Cebu, Bohol, and Iloilo. Accompanied by training by Liter of Light on how to build, install, and repair each unit, the lights provide a new source of livelihood for communities that have lost their traditional means of income due to the COVID19 pandemic.

Since its launch in July 2020, LIGHT IT FORWARD has counted on the support of thousands of individuals, corporate sponsors, and enterprises who have signed on to the challenge. In addition, 350 celebrities with an estimated total fan base of 30 million supporters have built lights and challenged others to participate, including Cebuano celebrities and influencers Ellen Adarna, Jen Martinez, Toni Pino Oca, Kali and Tonyo Carcel, Divine Lee Go, Ben and Vern Enciso Lim, and Neil Felipp San Pedro, each of whom has committed to building light and challenged others to join the campaign.

The participative solar artwork is the latest in a series of large-scale solar installations that the Liter of Light has built since November 2020. The foundation built the largest Philippine solar-powered flag in Asia, which was unveiled on November 30, the birth anniversary of Andres Bonifacio, and last December 30, Liter of Light paid tribute to Jose Rizal with a large-scale solar portrait of the national hero. On January 6, the organization built the largest (solar) rosary in the world to unite Filipinos in healing prayer for the world, led by the Manila Cathedral and in partnership with the Catholic Bishops Conference.

All three of these images were made in honor of the Filipino frontliners that have kept us safe, healthy, and well during the COVID-19 pandemic. In 2021, the organization created a large-scale replica of the UN SDG wheel and artworks representing the 17 Sustainable Development Goals, in partnership with Makati City Mayor Abby Binay, the Rotary Club of Makati Business District, and the Bonifacio Arts Foundation, Inc., and the City of Taguig.

Everyone who participates in the LIGHT IT FORWARD campaign receives a kit that they will use to build a solar light, which takes less than 30 minutes to assemble. Liter of Light has created online videos to guide participants on how to assemble the devices. Challenge participants are asked to dedicate their light to an essential worker or frontline that has impacted them during the COVID-19 pandemic. After recording their solar light building, each participant must challenge their friends to build a light.

The campaign is part of a broader strategy for Liter of Light, the official Philippine private sector representative to the upcoming World EXPO, which will take place in Dubai from October 2021 to March 2022. The organization will use its platform to shine a light on how Filipino malasakit is paving a way for a brighter future in a tangible, measurable way.

Aurora Balibay - April 22, 2022 0
Here's how to join the Earth Day Challenge to build the award-winning Light It Forward solar lamps by the Filipino-born social enterprise, Liter of...